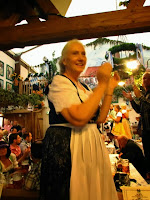 Just getting from Oregon to Munich should be enough of an adventure, but on Iceland Air it was easy.  The adventure was Oktoberfest. Yes, at 63, I danced on the table in my dirndl (and I don't even drink). The young Germans loved it and cheered me on. We only had to step over a few drunks on the sidewalk to get back to the S-bahn. Another adventure was riding in the back seat while my daughter-in-law drove 186 km/hr on the autobahn. Now, for you Yankees, that about 116 mph.

Then there was Neuschwantstein Castle.  This can hardly be considered a unique adventure when they surmise that 60 million people have visited it.  The adventure was trekking from the bus down the hill to the castle, then up a flight of stairs in the courtyard for a good photo, back down, up 165 stairs inside and back down 181 to the kitchen, then up the hill to catch the insane bus ride down. The bus is large and the road narrow and winding. Some people got sick, claustrophobic, and refused the ride back down. Not me! I just held on and watched the 4 year old enjoying the ride "Whee!" is the same in German.

I cannot leave out the crazy search for my great grandmother's birthplace.  Now, we wouldn't just want to go to the town of Ahornberg and look for the smaller area nearby listed on her baptismal record, #23 Holzlmuhle. Oh no, I'm too smart for that. I found the latitude and longitude coordinates for Holzmuhl on line, and we used our car's navigation system to get there. A little more east! Now, try north. Oops! there's a mountain in the way! Uhhh...we're awfully close to the Czech border. When we finally found the coordinates it was a restaurant. After talking with several restaurant employees, they got an old German woman from the back room who told us how to get to Holzmuhl. When we arrived the lady there said there had never been 23 houses in their village. So, the sane way...we put Ahornberg in our navigation system, drove there, almost...right before arriving we saw a Holzlmuhle sign. Hey, that's a different spelling! It was worth the effort. The current owners of the farm were very nice, talked with us for quite a while, and let us take pictures. 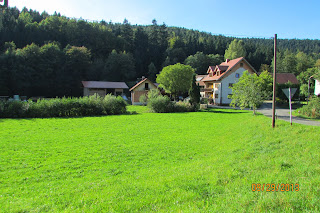 Now, back to the adventure of daily life, which is quite exciting enough for me.
Posted by Unknown at 4:40 PM No comments: